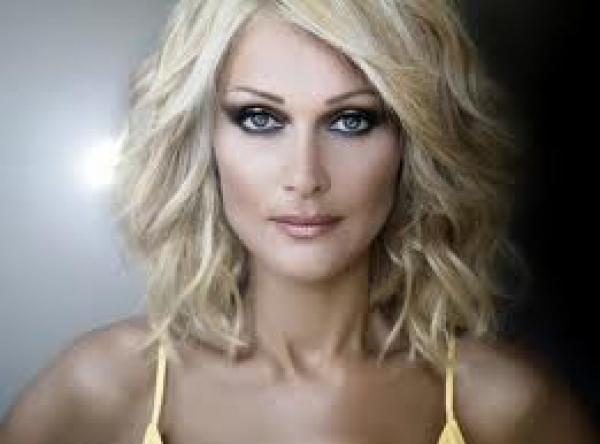 Natasha was born and raised in Thessalonica, where her career started by performing her favorite pop songs in the night clubs of the city.In 1996 she goes to Athens and performs in a night club with Antoni Remo and Lambi Livierato, this was her first contact with the athenaeum audience, which welcomed her warmly.

Her successful stage presence led her to discography very soon and in 1996 she signs a contract with SONY BMG.Her first album was released in October 1997, titled “Natasha Theodoridou”. Only within a few months become platinum, putting her on the map as the new star of the Greek music.

In 1998 “Deuteri agapi” was released and in 2000 “Tha miliso me t’asteria”, in 2001 “Yp’ euthini mou” and in 2002 “Tosi agapi pos na hathei” lyrics and music by George Theofanous. The album becomes platinum and all the songs of the album huge hits, Natasha’s performance is one of a kind and in April of 2003 she wins 2 ARION awards, “Best folk singer” and “Best pop singer”.

In 2003 Natasha Theodoridou collaborates for the first time with Evanthia Remboutsika in the soundtrack of the extremely successful movie “Politiki kouzina” performing in a unique way the song “ Ta limania” which was adored.

In 19th October 2005 the new, double album by Natasha Theodoridou was released and contains 18 songs; its title is “Os ekei pou I kardia mporei na anteksei”. Natasha Theodoridou works with Mihalis Xatzgiannis (he has written 4 songs for her, the lyrics are by Eleana Vrahali) and has 2 duets, one with Giannis parios and one with Sarbel. The rest of the songs are composed by well-known composers and songwriters.

In winter 2005 Natasha Theodoridou works with Giannis Parios and Sarbel in Iera Odo and in spring she sings with Mihalis Xatzigiannis in Thessalonica.In summer 2006 she tours America and together with Nino with great success. In autumn of the same year she starts performances in “Votaniko” with Stamati Gonidis.

In December 2006 her new album was released, titled “Eho mia agalia” the album contains 12 songs written by the well-known George Moukidis. The songs were embraced by the audience and the album turned gold within a few months!In summer of 2007 Natasha Theodoridou tours Greece and abroad with Sarbel, performing successfully many concerts.A few months later she starts live performances in Votaniko with Nikos Kourkoulis and Elli Kokkinou.

At the same time, her new album Titled “Natasha” was released; music by Kyriakos Papadopoulos and lyrics by Ilias Philippou. This coincides with the celebration party for 10 years presence in Greek discography where she sang all her big hits and was deified by the audience that crowded the venue.