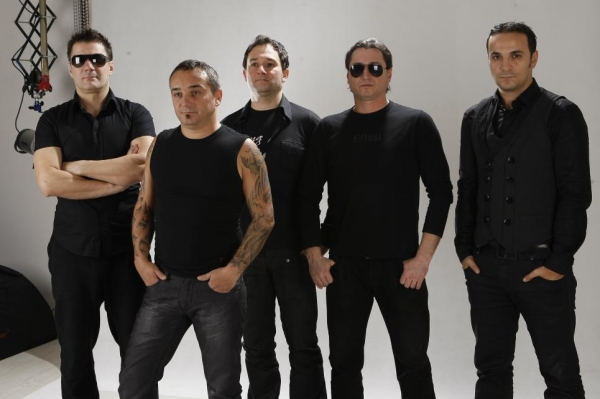 In a very short time, this band recorded their debut album called "La vulturul de mare cu peștele în ghiare"...(At the sea eagle, holding captured fish) In 1992, the soloist Dragoș Bădoi was replaced for a short while by Cristian Roman (at present the leader of the band The Teachers Orchestra), followed by Toni Șeicărescu (at present singing for Krypton), with whom they recorded the album "Seducție" (“Seduction”). This album contained seven songs and was greatly appreciated by the public. Some of the songs, such as Seducție, Bogdan Barosanu, Texaco, Street fighting boys, Scufița roșie, Vrăjitoarea, became great hits at that time. During their concerts, the band gained a lot of fans. At the end of 1993, on the 17th of December, the Direcția 5 Orchestra performed on the stage of the Theater “Ion Creangă” within a very original show for those days: baking vocals, playing IN DI ANKA on a sitar, the presence of Andre Ateka. The concert took place behind closed doors. The band used this audio material later in order to record a Live material called “IN DI ANKA live”. In 1994, the band launched the album "Pantofi de lac" (Lack shoes) and they also collaborated with Loredana Groza for her album "Atitudine" (Attitude). The album was launched on the 8th of April 1994 at the music store in Bucharest, in the presence of a numerous public, who caused a traffic jam on the Boulevard «Calea Victoriei”. In May 1994, with the help and involvement of Radio Contact and Maria Popescu (thanks Maria!)- the present wife of Iulian Vrabete from Holograf, the first official fan club for a Romanian artist or band was created. The members of the band met each Saturday in the Herăstrău Park, at the entrance from the Arch of Trumph.

In 1995, the guitarist Vlaicu Giurgea and Toni Șeicărescu left the band, the last one being replaced by Gabi Nicolau (Krypton). The band performed at the festival “The Golden Stag” in September. In 1996, there were some fights within the band, Marian Ionescu being accused by Răzvan Mirică, Florin Ionescu and Cătălin Onoiu that he is only interested in his own career, the rest of the band considering themselves to be the real band Direcția 5. It seems that Loredana Groza caused the rupture of the band Direcția 5. During one year, there were two bands called Direcția 5.

In order to avoid further confusion related to the existence of two bands with the same name, Florin Ionescu (drums, voice), Răzvan Mirică (solo guitar, voice, composer), Bobby Stoica (keyboard)- at present at Voltaj, Mircea Preda "Sponge" (bass) and Toni Șeicărescu (voice) – who came back from the Netherlands after many years, tried to launch a new project called “the New Rome”. Unfortunately, this project was not that successful and there was no new album. During a television program of the national television channel, the band sang two promission songs: Strada mea (My street) and Liber (Free).

After several years, Direcția V split in 1998 and only one of the two bands left: Direcția 5 with Marian Ionescu, Nicu Damalan, Marius Keseri and Cristi Enache. They recorded the album “Superstar” in 1999.