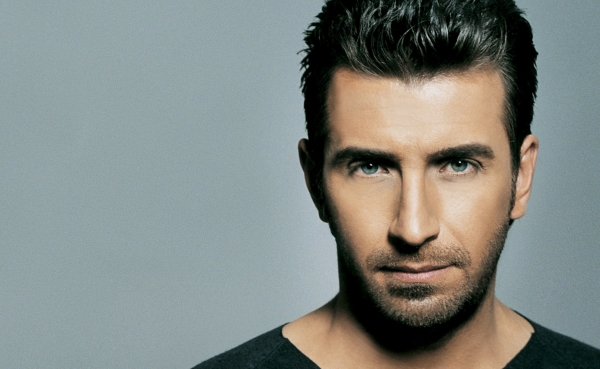 Thanos Petrelis (Θάνος Πετρέλης) is a popular Greek singer. He was born on 27 September 1975 in Athens where he grew up.
Since his childhood, his love for singing was obvious but without having thought of being professionally involved. It was 1998 when he started (professionally) his live shows in Athens. Since then he haven’t stop stinging until 2002 when he decides to participate in the first greek TV talent show - the Fame Story.


Career
Fame Story
Petrelis finished third in the Greek reality show Fame Story, behind Notis Christodoulou and Grigoris Petrakos.
He became a regular in live appearances across Greece, first with fellow Fame Story contestants and then with singer Peggy Zina, with whom he performed in several concerts in Athens and Thessaloniki during 2003.

2004–2006: First albums
In 2004 he released an album of his own, entitled Eihe To Hroma T’ Ouranou. The first track, "To Aima Mou", was written by Phoivos and became a hit. The album sold more than 30,000 copies and went gold. At the same year he won "BEST NEW ARTIST" award in ARION AWARDS.
Petrelis would then release a new album every year for the next three years. The follow-up to Eihe To Hroma T’ Ouranou was another Phoivos collaboration: Thymizeis Kati Apo Ellada, which went platinum. It was this year that his big hit "KERNAO" won two awards in ARION AWARDS. "BEST LAIKO SONG" and "BEST SONG OF THE YEAR". The following release was a platinum single entitled "Eftihos.The four songs on the disc were once again written by Phoivos and the title track, "Eftihos", was widely acclaimed.

2007–2009
The album Eimai Akomi Eleftheros included such songs "Lathos", "Doxa Soi O Theos" "Aman Kai Pos", "Adiorthoti" and "An Den Eiha Ki Esena" and went gold. He also gave a world tour to United States, Australia and South Africa in 2007 and gave a total number of 6 sold-out concerts. A few months later, Eimai Akomi Eleftheros was re-released with a DVD.
In June 2008, he traveled to Australia for five sold-out concerts. On June 9, 2008, Petrelis released the single "Ksipna Thanasi" (Wake up Thanasi) exclusively on Sfera FM. It was followed by a two-track CD single with the original version of the song and one remix, but was also available with the "Germanos Remix" when purchased exclusively through the telecommunications store Germanos. The song is composed by Phoebus and the single went platinum. On Auguest 22, 2008, Petrelis started shows at club Thea along with Nikos Ikonomopoulos and Yiorgos Tsalikis until November 1. On November 20, 2008, Petrelis released the song "To Paihnidi Einai Pleon Diko Mou" exclusively to Sfera FM, along with a music video, filmed in a Casino, which was released soon after. The song was released to all other radio stations on December 1, 2008. By December, Petrelis released another CD single, this one with four different songs, all composed by Phoebus. The title track "To Paihnidi Einai Pleon Diko Mou" (The Game is Now Mine) was joined by "Efharisto", "Na Hamogelas" and a new remix of the previously released "Xypna Thanassi".The song "Adiorthoti" has also been remixed by Master Tempo.
In January 2009, Petrelis traveled to the USA and Canada for nine sold-out concerts. His next appearance in Athens was again on April 23 at club Thea having support of Ikonomopoulos. He finished his appearances there mid of July and his next appearance was in Thessaloniki at club "Orama" for a few nights only. After a short period of relaxing, he started appearing on December 4, along with Yiorgos Tsalikis at "Starz".

2010-present
In January 2010, he left Heaven Music and signed with Phoebus's record label, called The Spicy Effect. On January 23, 2010, Petrelis released the radio single "Filotimo", which was written by Phoebus.
In November 2010 he makes again successful tour in USA and Canda with 9 sold-out concerts.
In December 2010 he released the song "Hristougenna" along with the other artist of The Spicy Effect and his new solo single "Thelo ke ta patheno".